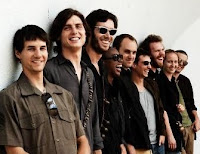 “With its third album, Ghost Rock, Detroit, Mich. band Nomo sets itself apart from the Afrobeat masses. For much of this decade, dozens of austere instrumental bands have copied scratchy ’70s funk styles, often demonstrating a high degree of respect to their homage but, unfortunately, little real imagination. So it’s nice to hear that after two nominal albums, Detroit, Mich.’s Nomo has separated itself from the revivalist pack with a few remarkable tricks, incorporating flickers of Krautrock (on the Can-influenced “Ghost Rock”) and Chicago post-rock (as on the seemingly Tortoise-inspired “Brainwave”) into its usual Afrobeat mix.”

The show is at 8:30pm on Saturday, May 23 at the Spaceland. Don’t forget, it’s 21 plus. KSPC will be giving away tickets all week, so make sure you tune in.  Also, our lovely DJs will be working a table so you can stop by and say hi, and grab some free stuff while you’re at it!