For this installment of The Spin Doctors, we decided to each review a different song on the same album. This week’s album- “Long Live the Pelican Express” by Kleenex Girl Wonder.

I’m not good with lyrics. I don’t remember them. Anybody who’s ridden in my car knows that. I sing loudly and I sing wrongly. I should be stopped. I’m a bad music listener in a lot of ways. I often listen to music while I’m on the computer, which is maybe one of the worst ways to listen to music. My atom-sized brain can only pay attention to one thing at a time and, look, lyrics are great and all, but browsing some girl-I-don’t-know’s Facebook profile pictures is gonna take precedence EVERY TIME.

Basically, the thing at which I’m trying to get is that lyrics, in which people very accurately locate a lot of meaning, do not always factor into my music listening. At least, not at first. That’s not to say that I don’t love and obsess over good lyrics. Recently, for example, Yo La Tengo’s “A Shy Dog” have been simultaneously inspiring and crushing me, but that’s a story more fit for Live Journal or a diary.

Anyway, because lyrics are so important and because I often don’t often pick ’em up until I’ve been listening to a song for quite some time, music with difficult-to-discern lyrics intrigues me. Why write lyrics when you’re gonna bury them in fuzz and distortion? That’s a question that came up when I listened to “I’m Racing Isaiah,” the opening track off of Kleenex Girl Wonder’s Long Live the Pelican Express 7″ (fucking fantastic band name, by the way). It’s not hard to make out some of the lines frontman Graham Smith is singing, but a line will get mumbled here and a word slurred there.

This throws the focus on the rapid-fire drum line, warm distorted guitar and essential enthusiasm of Smith’s vocals. And really, even with my lyrics-deafness, I can hear the emotions expressed in the song, even if I can’t make out all the lyrics. It does help that variations of the phrase, “Everything’s gonna be alright” are among the discernible lyrics, but you get that just from the music (assuming Smith isn’t pulling some devastating Heaven-Knows-I’m-Miserable-Now shit). The human voice (and dogs’ howls and, because this is KSPC, cats’ meows) can really pack it in emotionally, even without proper enunciation. And, speaking for us robot-voiced individuals, the opposite is true as well. Ask my girlfriend.

In these few short weeks as half of the powerhouse team that is The Spin Doctors I’ve learned just how calculated our ‘randomness’ is. We choose music because it somehow captures our interest, it can be anything from the name of an album and its wacky cover art to some previous knowledge that what we are looking at is obscure, silly, or just plain weird.

So today’s foray into the vinyl library was interesting. The first 3 albums we chose were very good, relatively normal pieces of music. A lot of the music we have at KSPC is like that. Well, maybe not ‘normal’ by common standards but it’s certainly (mostly?) inoffensive.

When my co-worker/life partner/cookie consultant (seriously the boy polished off a bag of Milano’s today) Joseph suggested we take a listen to a band called “Kleenex Girl Wonder,” I was expecting something as weird as the name. I’d never heard of them before, though they seem to be pretty prolific and respected. I have to admit though, when I saw that the second track on the B side was called “Mystic Pizza,” this was the first thing that popped into my head: 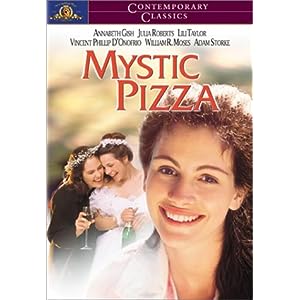 Maybe I expected the song to be more about pizza than it was. Perhaps I was looking for my weekly dose of screeching instruments and a particular brand of music that I’d want to listen to once, write about for the blog, and probably not bother listening to when I got home and was sitting in my room.

But this song was something else, it was soaring… and faintly Scottish sounding.

If I were on a surfboard with Mel Gibson circa Braveheart and craving a slice of pizza this might be the song that came to mind. It ha’s lots of elements that range from fuzzy guitar and banging drums to an actual chorus that reference “mystic pizza,” whatever that may be. No definitely lyrics appear online and it’s kind of hard for me to tell what the singer is actually saying. Joseph just walked into my office and together we determined that this is a rollicking bar song, it’s swinging your arm back and forth with a pint in hand, maybe drunkenly slobbering on one or two of your buddies who are right by your side and have been for year upon year. It’s a song that makes you f eel like your stomach really doesn’t hurt as badly as you think it does from those 2 dozen wings you ate. It’s a song that makes me think…. Budweiser.

This music is emotive, catchy and fun. It’s not at all what I was expecting because it’s good, and I don’t know what I was expecting it to be. Maybe weird, maybe a novelty. But really, what is “weird?” Is it something I wouldn’t play on my show, or something I can’t imagine listening to in my own free time? That’s too hard of a thing to classify, and sometimes I like listening to music and thinking only about how it makes me feel, even if it does bring up sentiments relating to a classic film about 13th century Scots.