Working at KSPC has made me realize one thing in an especially brutal way: I really don’t know much about music. Sure, I used to think I was good. Even as a kid I had a pretty comprehensive knowledge of any of the songs on the “oldies” stations, and kept up with Top 40 and even got as daring as waiting in line at my local Warehouse Music for Radiohead’s “Hail to the Thief” for its midnight release waaaay back in Summer of 2003 (really)!

But from day one as an employee here, I’ve felt mostly, if not entirely, overwhelmed by everything I don’t know. I’ve tried coming in an hour early for my shows, dropping by the basement and pulling albums at random to pop them in for a listen, but I feel like even know, even after spending almost every day down here for a month and a half, I still am only beginning to grasp just how much there is for me to know. Joseph and I have been tackling the vinyl library one by one, but a previously ignored and incredibly impressive portion of our albums lie in the genre (movement? lifestyle? religion?) of jazz. In the highest corner of the dustiest room, the jazz albums sit. Though I’m aware some specialty DJs love these albums as children, for the most part people don’t even bother to play them. I was surprised to find that this section of our library is perhaps our most commercial. In terms of jazz music, there are few artists more popular than Count Basie, Louis Armstrong, Sid Bechet, and Miles Davis. But here at KSPC (a station that hesitates on programming even larger “indie” releases), we have all of the aforementioned big names and much more. And they STILL don’t really get played.

Though my knowledge of jazz is rudimentary at best and confined mostly to a few classes I took at Scripps, I do really, really enjoy listening to it. It’s a world I am hesitant to dive into because it seems it requires the investment of your soul, but an album I pulled today released by Eddie Harris and Ellis Marsalis entitled Homecoming had me casting my reservations aside as I listened to the third track on the second side, “Have You Met Miss Jones?”

Even some of you jazz novices, like myself, might recognize this track. It has been covered by Frank Sinatra most famously, and even made its way into the realm of popular music when a cover by Robbie Williams was featured in the movie Bridget Jones’s Diary. 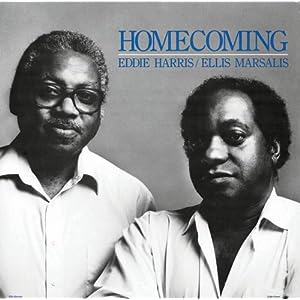 This instrumental version features piano played by New Orleans jazz veteran Ellis Marsalis (who according to Wikipedia “can usually be seen performing on Fridays at Snug Harbor jazz bistro in New Orleans”) and a seductive solo on tenor sax by Eddie Harris, a player so good that Miles Davis chose to honor him by covering his “Freedom Jazz Dance” composition. This track is playful, airy, and light. It’s so good I find myself listening to every note and intonation, but at the same time it’s so unobtrusive and natural that it could play as I walk in a park and I wouldn’t even think to point out that it’s not a completely organic soundtrack to my life. It’s just that good. This album is a welcoming introduction to KSPC’s jazz library, a place I want to spend more time and thought. So don’t be scared, put down the Pavement, and maybe pick up some Davis to start.

Nik-L-Nip is most known as the waxy “juice confection” that your parents allowed you to consume only if they gave absolutely zero fucks about your health and well-being. For those lucky few who never experienced a Nik-L-Nip, it’s basically just colored syrup in a wax bottle. The fun part is that you have to bite the top of the bottle (or nip it, if you will) to create an opening and gain access to the syrup. Okay. Wax is a shit substance to chew on period but the Nik-L-Nip wax is also tough as nails and sealed vault tight. I remember tearing at the bottle for several minutes, choking down about half the damned thing in the process, before being able to lap up the four drops of chemically-infused sugar water held within. However, we are not here to talk about my difficult childhood. We are here to talk about the music, and Nik-L-Nip also happens to be a band from Pennsylvania.

Composed of Lara Cohen (drums/vocals) and Mark Powell (guitar/vocals), the duo formed in the early ’90s and, from what I can tell, they didn’t release much music. The 7″ I pulled from the KSPC library is a split that was released in 1999 with a joint issue of Runt and Yakuza zines. I’m focusing on Nik-L-Nip’s contribution, a song called “Roseville,” but I included the second track, a voicemail message from Yakuza founder Dave’s grandmother, because it’s funny and nice. Decidedly lo-fi and charming, “Roseville” is pretty simple pop, kinda like the stuff coming out on K records around this time. According to the liner notes, “Roseville” was originally for a cassette compilation and was written and recorded in under 24 hours.

Nik-L-Nip is a suiting name for the band, whose rudimentary musical ability and directness evoke childhood. Neither Cohen nor Powell are powerful singers or musicians, but that’s not the point (though Cohen, in the liner notes, does claim that she can “sing a bit more on key” now than when the song was first recorded). This isn’t a song that was recorded over several weeks in a studio. This is a song that was recorded in probably a couple takes, if even that many. It’s a testament to what two people can do with very little and is more emotionally affecting and immediate for it. We can assume that Nana B wasn’t thinking about demographics or record sales when she left that voice message. I’m not gonna hop on the soapbox here and orate about lo-fi music and “authenticity” because I’m an idiot and not the person to do it, but I will say that I’m proud to be part of a place that supports people doing what they love, which is what this song is to me.