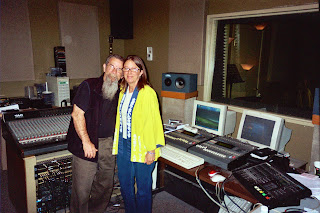 When you see the cover of the album “Side by Side,” you might write it off as just another local band. At least, that was my first reaction when I received this CD in the mail, along with a note explaining that the “Jackson Family Band” was a local Claremont couple who thought their music would fit well on an “underground” show. I skeptically put the CD into the player – and was shocked by the lovely, cohesive Americana music that came out. The Jacksons provide an apt description of their music on their blog:

“We are Larry and Rhonda Jackson. We are the Jackson Family Band. Larry plays accoustic, electric and slide guitar, sings and writes most of our songs. Rhonda plays congas and sings. Our music is mostly accoustic, bluesy-folk,Americana-roots type music. We have just finished our third CD entitled Side By Side. What we love to do the most is share our love and joy for music and spread that joy to as many people as we can.”

With a deep, almost Johnny Cash-esque voice, Larry sings heartfelt tunes about loving each other, supporting the troops, and learning to move on. His wife chimes in on some tracks with warm vocals reminiscent of 1940s greats like Judy Garland and Doris Day.

“Side by Side” charted on KSPC this week – listen up and maybe you’ll catch a folksy tune or two!