Guitar Wolf may possibly be the world’s greatest Japanese rock and roll band… EVER! This statement was strongly solidified as Guitar Wolf shocked and deafened about 200 people at the El Rey Theater in Los Angeles on Sunday.

From the start of their blistering sweat drenched set, Guitar Wolf had everyone in the thick crowd freaking out! The Nagasaki rockers marched onto the smoked filled stage with what can only be described as savage prowess. Drummer Wolf aka Turo, begin pounding on his bass tom like a demon only to be met with bassist U.G.’s adaptation of Planet of The Wolves.   At this point the crowd is losing their minds! Grown men are bouncing off the walls, slamming into their girlfriends, Girlfriends are slamming into new friends everyone seemed to moving in a singular motion to the distorted Jet Rock.

Guitar Wolf’s revved up distortion melted from one song to another without a single pause or stop. Singer and Guitarist Seiji is a master of his craft and a total nut. He started pulling people out of the crowd and forced him to play his guitar…right. It was like watching a punk rock version of the karate kid. Seiji would scold and slap the hands of the kids he brought up to play his guitar if they weren’t rocking his beloved instrument right.
Suddenly Seiji began grabbing folks out of the crowd, yanking them onto the stage. At this point Seiji decided to make a human pyramid with himself at the top of a 10 man pyramid. The show ended shortly after with the crowd chanting for more. 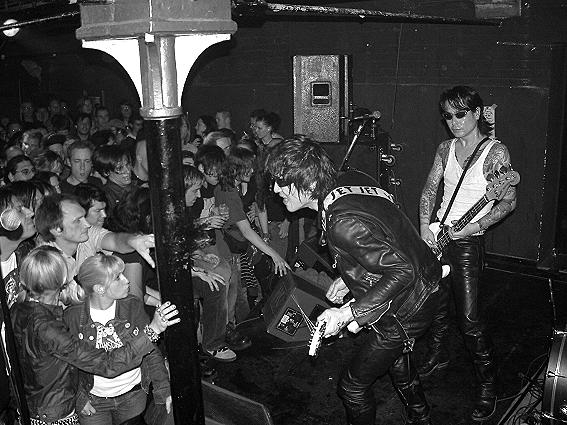 Guitar Wolf was amazing to say the least. Absolutely uncompromising Rock and Roll, savage and brutal but most importantly fun, and I do mean fun. In fact my ears are still ringing as finish this post.
P.S. The opening band, Hans Condor is by far one the most interesting acts I have seen in a long time and totally ruled. Highly Recommended. – Fleshy