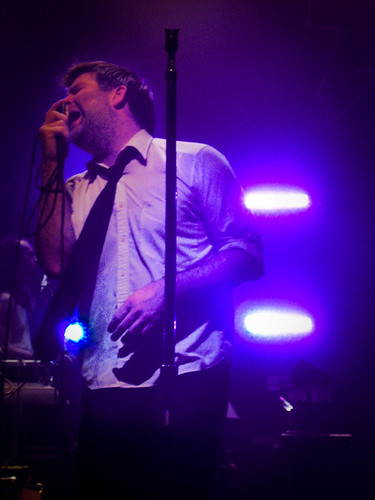 Let me start this review by saying that the Hollywood Bowl is not a good place to see music. At all. In fact, it’s a pretty terrible place. It’s all seating and any seat that’s reasonably priced is so far away from the stage you might as well just gouge your eyes out (don’t actually do this) because you won’t be able to see anything anyway. Now let me say this. Despite these problems, the show I attended at the Hollywood Bowl last Friday night was one of the best I’ve ever been to. Partially from some sneakiness that resulted in “borrowed” seats much closer to the stage than our purchased ones and from the fact that LCD Soundsystem, Sleigh Bells and Hot Chip can really rock it.

The only visible set up on stage for Sleigh Bells was a wall of amps. This pretty perfectly sums up the band. There’s nothing superfluous or extravagant about the gritty sonic assault that Sleigh Bells dishes out. The moment that Alexis Krauss and Derek Miller walked on stage, they owned it. From the opening guitar screech of “Tell ‘Em” to Krauss’s final shout at the end of “Crown on the Ground,” they dominated the arena. Unfortunately for them, at the start of their set the crowd was lacking in numbers and enthusiasm and no matter how fly my friends and I danced, it couldn’t make up for lack of people. Regardless, Krauss has a natural stage presence and larger-than-life swagger that makes her energy contagious and by the end of “Kids” most of the crowd was up and dancing, or at least swaying coolly. It’s really Krauss’s show. Miller spent most of his time to one side of the stage churning out punishing riffs on his guitar while Krauss bounded back and forth, clutching the mic, head bobbing as strobe lights flashed. Quicker songs like “Riot Rhythm” and “Straight A’s” translated better live though Krauss made slower album standout “Rill Rill” rock equally hard. The best part of the whole show, however, came during “Treats.” It’s a slower, post-apocalyptic dance party kind of song and in the middle of it, Krauss just screams as loud as she can into the microphone. She’s bent completely over on stage, totally engaged in being as loud as humanly possible. Then the scream ends and the song drops out for a second and then, in the short following silence, she giggles. SHE GIGGLES. Anyway, I’m totally in love with her.

Next up was Hot Chip and after the amazing, but harsh, music of Sleigh Bells, I was ready to get down to some fun electropop, which is exactly what happened. Hot Chip walked onto a well-lit stage looking like a group of normal, nice, unassuming dudes and proceeded to get the whole crowd dancing by the end of their first song, “And I Was a Boy from School.” Alexis Taylor and Joe Goddard, founding members and vocalists, played well off each other. Taylor took front stage with his high falsetto and Goddard, further back on the stage, played synthesizers and joined in with his deeper voice from time to time. The band is extremely tight, letting songs stop completely and then bringing them back in perfect unison. They played songs drawn evenly from their last three albums – One Life Stand, Made in the Dark and The Warning – closing their set with a drawn out version of their hit single, “Ready for the Floor.” The extended ambiguous jam at the beginning made the moment when Taylor grabbed the mic for the first “Say it, say it, say it now” all the more worth it. Hands were thrown up in the air and stayed there for the rest of the song.

And then it was time. Before I get into this section of the review I want to say that I’m in love with James Murphy (Yes, I’m one of those people.) So I may have been literally bouncing with excitement in the moments leading up to his set. I may have kicked my chair when the lights went down. I may have done both of those things. But seeing James Murphy. Live. With his amazing band. I was like a kid who really likes this one thing and then gets to see that one thing perform music live. That’s not a good analogy. Anyways, the band walks out and takes their places, James Murphy, dressed in all white, thanks the crowd for coming (something he would do after almost every song like the charming gentleman he is) and the set begins. The unmistakable beat of “Dance Yrself Clean” burbles out over the arena and people start to get excited. And by people, I mean me. Some genius (no sarcasm, this guy’s IQ was probably above 300 for this idea alone) had been handing out glow sticks to the people in our seating area and when the drums came in about three minutes in, everyone tossed them up in the air. As glow sticks rained down, the entire crowd bounced with the beat. Sometimes things just work. 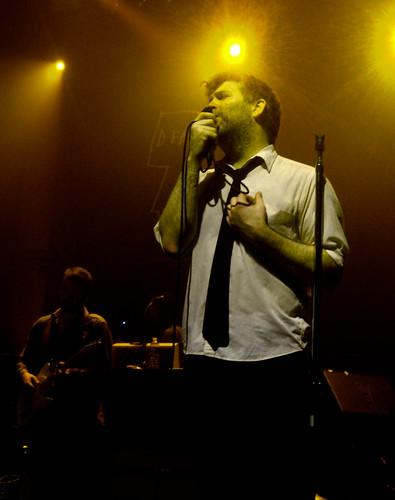 Murphy is a showman and as he yell-sang into his signature vintage microphone, he looked like he was meant to be on the stage. Later, he introduced all of his seven-piece band by gesturing to each member while balancing on one leg. He was just the right balance of confident and humble, serious and self-deprecating. His band is also amazing. Pat Mahoney kept each song moving on drums, Nancy Wang and Gavin Russom locked it down on synthesizers and keyboards and David Scott Stone, Tyler Pope and Hot Chip guitarist Al Doyle pounded out steady guitar and bass rhythms. The band played songs from all their albums, balancing hits like “Daft Punk is Playing at My House” with lesser know tracks like “Movement.” Though my friends and I were booted from our adopted seats halfway through the set, LCD Soundsystem was still magical, even several staircases up in our actual seats. As I belted out all of “All My Friends” along with Murphy and the whole crowd in the fog and mist of a strangely cold LA night, everything thing felt pretty alright. The band closed out their set with an enthusiastic performance of “Yeah”, one of my favorite songs off their debut album. The band slowly walked off stage, eventually leaving only Pope to tend the synthesizers that churned out random babble as smoke began to fill the stage. Then slowly out of this babble floated hints of the synth line that starts out Sound of Silver standout, “Someone Great.” The line became more and more pronounced and suddenly the band was back for an encore. Murphy treated the song with all the intense emotion required for such a devastating song about the death of friend. The encore was rounded out with “Losing My Edge” and the closer from their new album, “Home.” Murphy thanked the crowd one more time and then it was over. I was a little sad, but mostly I was overcome with a warm feeling. I didn’t care that they hadn’t played one of my favorite songs, “All I Want,” or that we had been kicked out of our awesome stolen seats. As I wandered through the parking lot looking for the shuttle that was to return me to the real world, I realized I didn’t care much about anything bad. It sounds pretty stupid but it’s true. LCD Soundsystem, you magnificent kings and queens. You know how to do it.

Review by Joseph Ocon
Photos by Ari Mygatt. May 2010.