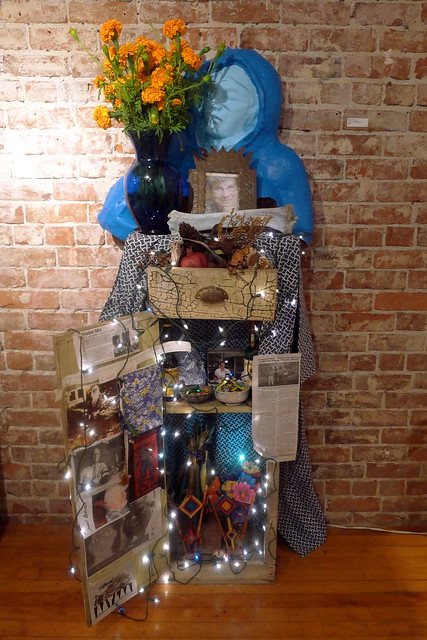 Photo by Julia MacNelly.
Last Saturday evening, before Halloween festivities would prompt me to don a disguise of vivid tribal facepaint, I came across a different kind of disguise. At first glance, the dA Center for the Arts in Pomona seems like it’s just an art gallery—and an impressive one at that, with lively sculptural paintings and installations seeping out from every corner (and some even hanging from the ceiling). But that’s where its disguise has you fooled: it’s not only an art gallery, but a concert venue, a yoga studio, and a classroom.

On Saturday the 26th, a $5 admission fee granted entrance to the art exhibition—one of about ten that the dA stages annually; performances by two local bands; a documentary that was screened on a wall of the gallery; and access to a container of delicious pumpkin chocolate-chip cookies. If there is a better setting for listening to some new music, I can’t think of one. The first band, No Paws, had a gritty garage sound backed with a punch of cheerful synthesizer—think along the lines of Harlem Shakes. Hailing from Los Angeles, N O W was a different experience altogether: part music, part spoken word (and at one point, performance art, as the singer tumbled around on the floor among audience members), N O W dropped danceable beats that sounded like a sleepy robot coming to life.

You can find more information on the dA center at their website, including weekly schedules and upcoming events. Also, take a look at more pictures of the dA space and the artists who performed on October 26 on KSPC’s photostream!