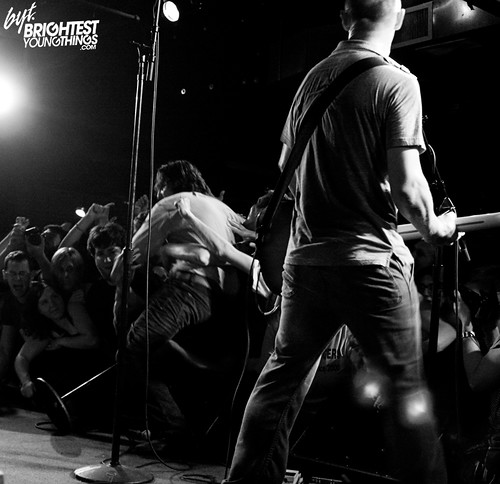 Pictured: Rachel D. (bottom left, center) gazing mistily at Cap’n Jazz frontman Tim Kinsella during their 7/23 reunion show at the Black Cat in Washington, D.C. (More photos at Brightest Young Things.) Today, she explains why you should definitely see them on 8/28 at the Echoplex.

July 23rd, 2010 – It is an unspeakably hot Friday night in D.C., probably one of the hottest nights on record. The air conditioner in the Black Cat is out of commission. The bands and the audience are pouring sweat all over one another and their instruments.

As soon as Cap’n Jazz strikes their first chord, we are plastered, literally plastered to the front of the stage, like stinky human papier mache.

The crowd – mostly kids who can’t much older now than the members of Cap’n Jazz were when they formed the band in ‘89 – instantly transform from stand-offish all-ages scenesters into some kind of delighted sea creature, tentacles waving, reaching out to gather the band into its many-limbed embrace. (I’m mixing my metaphors, but please, bear with me.)

The fluid (and, uh, squishy) press forward became kind of comfortable once you adjusted to the idea of being very, very friendly with your neighbors. To the girl to whom I, fearing for my safety, clung bodily for the duration of the night – I’m sorry, I never got your name, but I really do owe you dinner.

It is so unbelievable, unbearably hot. Eventually we stop noticing. We are bathed in a slick of pure adolescent sweat.

Tim holds up his water bottle. People cheer. Tim says, “I kinda feel like a jackass, you know, getting up in front of people and having them cheer for me. But cheering for water! That’s something else. That’s great. It’s like, ‘Yeah!! The source of life!!’” The source of life! Water was dispensed upon us. We are baptized in the streams of Ice Mountain.

Then there is laying on of hands. We touch Tim and he touches us back. While I don’t believe his feet ever actually left the stage, the sea of limbs was such that as he sang, he could periodically just kinda lean forward into the press and be supported and touched in many places.

The really beautiful moment was when – and I can’t explain how or why this happened, chalk it up to the spirit of rock’n’roll – Tim reached out and pressed his palm against my forehead, then gathered me into a sweaty one-armed hug and nuzzled my face. It felt like an exorcism. I was healed.

Later: a young man next to me says, grinning, “Dude, I’ve cried straight through the past five songs!” He was so sweaty, I don’t think anyone would have noticed.

By the end of the night, I was soaking in the sweat and tears of hundreds of young people. It was very human. I felt very alive.

The bottom line: That a group of grown men playing songs they wrote when they were 16, almost 20 years ago, can still incite a teen-age riot is nothing short of a miracle. See Cap’n Jazz at the Echoplex on August 28th. Get up front. And if you value your dignity, for god’s sake do not wear a white t-shirt.